In Memory of Mary McDonald

In Memory of Mary Hainstock McDonald 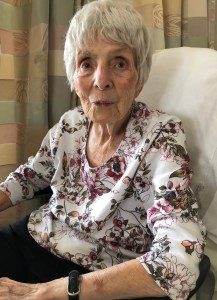 It was Elizabeth Andrew who said “Volunteers do not necessarily have the time; they just have the heart.”  How true that was of Mary, Stroke Recovery’s long term volunteer.   When I was asked to speak about Mary and her involvement with the Stroke Recovery Association of Manitoba I started to think about what qualities a fantastic volunteer should have. Well, you have to be energetic, creative, reliable, flexible etc., etc.  I started to list them in my mind and I realized Mary had them all.

Another nonagenarian who was born a couple of years after Mary once said, “If you have a passion for what you do there is no limitation on how long or how much you can accomplish.”  That was Tony Bennett. His passion was music.

Mary had a passion for helping SAM.

Tony also had a hit called “I Want to Be Around to Pick Up the Pieces” and Mary was always there to pick up the pieces when one of us dropped the ball.

I vividly remember the first time I met Mary. It was in 1985 and I was attending an educational session at Concordia Hospital. Mary was one of the presenters.  She spoke about understanding stroke, care-giving and our association.  She was so knowledgeable on the subject. It wasn’t long after that I was hired by the association to assist the Executive Director, Ruth Gudgeon.

Soon an action committee was formed to plan the future of the organization and Mary went into action. Over the many years she:

In the late 80s an auxiliary was established under Mary’s guidance and Mary became the first president.  I can remember her working diligently on a funding grant which helped us open our Stroke Centre on Vaughan Street. Over the many years, the Auxiliary with Mary at the helm raised thousands and thousands of dollars. This helped us to keep our centre alive.

Nobody could lug boxes better than Mary.  She could often be seen loading boxes of craft and knit items into her car to sell at booths in malls.  I always admired her strength and her determination. She was probably one of the hardest working volunteers I have ever known. Seriously, I don’t think I ever heard her complain. There was never a mention when I was complaining about how hard it was “for me to carry some of this stuff.”  She must have agreed with Linda Popon who once said “Doing heart work is not hard work.”

She was a very dedicated member of the Board of Directors of SAM and always shared her expertise with others.

How does an organization ever thank a person who gave so much to help it grow? There are many awards and verbal thank you’s, of course, and Mary was presented with the Volunteer of the Year Award in 1990. She was made an honorary life member in 2006 – one of the first recipients of that honour.

Honours are great but leaving good memories behind is very special. I know for a fact that those who were involved with her at SAM have wonderful memories. They thought of her as a team player and a mentor and she was very highly respected. It is so evident today when I look around the room and see many of the volunteers and stroke survivors who had worked closely with Mary over the years.   Mary the volunteer extraordinaire was much appreciated and admired.

Now, may I close with something from Dr. Seuss? “Unless someone like you cares a whole awful lot, nothing is going to get better. It’s not!”

Mary cared a whole awful lot and she certainly made things a whole lot better.

With all the volunteer opportunities out there, we are so glad that she chose us.